HCMC should attract experts, scientists and people with special talents to work in the public sector. (Photo: SGGP)
Only five experts have been attracted in three years

In the Saigon High-Tech Park (SHTP), Dr. Hoang The Ban has been working as a consultant on the construction and development of the Training and Technology Transfer Center since 2016. Having worked in Japan for 23 years and then returned to Vietnam, it appealed to Japanese ODA and supported experts in training SHTP employees and engineers. Its activities are highly appreciated by the Board of Directors of the SHTP and by companies.

Dr. Hoang The Ban was the only one who persisted in staying on the job when Ho Chi Minh City changed its policy of attracting experts. In 2016, he returned to work at SHTP under the policy of Decision No. 5715/2014, piloting some policies to attract experts to work in four units in the city. With this policy, HCMC has attracted 19 experts. However, when the program was officially rolled out on a large scale, following HCMC People’s Committee Decision No. 31/2018, the experts left one by one.

In September 2019, the People’s Committee of HCMC issued Decision No. 17/2019 on the policy of attracting and developing a team of experts, scientists and people with special talents for the fields including the city needs during the period 2019-2022. Deputy Director of Science and Technology Department of HCMC, Nguyen Thi Kim Hue, said that HCMC had organized two rounds of expert attraction in 2020 and 2022. In 2020, HCMV was expected to attract 14 experts for five positions. The advisory board received 14 applications, but through the evaluation stages, only five people remained, including Dr. Hoang The Ban. In March 2022, the municipal people’s committee released a plan to attract five experts for 2022, but only two applications were sent to the advisory board.

On September 8, the people’s committee of HCMC continued to have a plan to attract eight experts for the management board of the HCMC high-tech agricultural park. Mr. Pham Dinh Dung, head of HCMC’s high-tech agricultural park management council, said these experts were to work for the unit for six months, with the tasks of selecting, breeding and producing aquatic and aquatic species. pathology; selection and selection of plant varieties; consultation and guidance on technology for the production of microbial products applied to agriculture. These are all essential jobs for guiding the development of HCMC’s high-tech agricultural park in the times to come. It is unclear whether he can attract experts. However, Mr. Dung said that to get the decision, the council had to spend nearly three years offering attraction positions.

Dr. Hoang The Ban works at SHTP with a salary and allowances of around VND20 million per month – an income level considered too low for an expert. With the current regulations, in addition to the initial support of 100 million VND, a professor and an associate professor will receive a salary coefficient of 9.4, or approximately 14 million VND per month, and the remaining positions will receive a coefficient of 8 .8, or about 13 million VND per month. month. Compared to the general level of salaries of civil servants, it is high. However, for an expert, especially a leading expert, this salary level is not appropriate.

Having worked for more than 20 years in a research institute under the Ministry of Agriculture and Rural Development (MARD), Mr. Le Van Cua, deputy director of the board of directors of the high-tech agricultural park of HCMC, has said that sometimes the salary is not the only factor that decides the attraction of experts. The MARD Research Institute used to have experts from New Zealand, the United States, Japan and India working together, and each expert had a different requirement. Some wanted to bring their family because they liked the living environment in Vietnam, while others only asked for a maid. Since then, Cua said it is essential to talk with each expert to understand their needs and come up with appropriate policies. 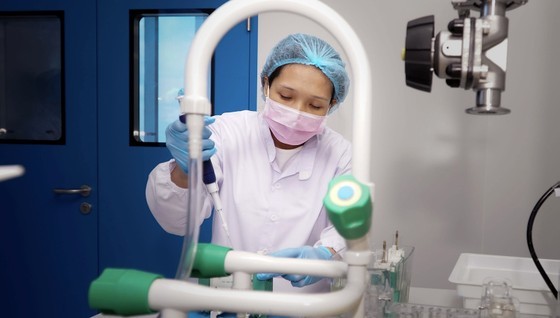 An expert works at the SHTP. (Photo: SGGP)

“It is unreasonable to pay the salaries of senior experts at a coefficient of 9.4 and 8.8. Previously, thanks to the maximum remuneration of 150 million VND per month, the center could sign contracts with experts. In 2020, the center registered to recruit four more experts, but there were no applications,” said the head of the Biotechnology Center.

Explaining somewhat the regression in remuneration policy, the head of the HCMC Home Office said that the current prescribed income level is based on the general regulatory framework for senior experts. However, Decision No. 17/2019 provides for a 1% bonus for research work by experts and scientists, up to a maximum of VND 1 billion. “It’s about encouraging experts and scientists to have work on specific products,” said the head of the HCMC Home Office.

However, in the case of Dr. Hoang The Ban, it is extremely difficult for him to receive this bonus because he is in charge of training and recruitment according to the needs of companies, and not of conducting a research project using the state budget as specified.

Decision No. 17/2019 is based on Resolution No. 54/2017 of the National Assembly on Specific Mechanisms and Policies for the Development of HCMC and Resolution No. 20/2018 of the People’s Council of HCMC. HCMC reviews the implementation of Resolution No. 54 and proposes a new policy mechanism to develop the city accordingly.

Assoc. Teacher. Dr. Nguyen Phuong Thao, director of the Infectious Disease Research Center of Vietnam National University HCMC, analyzed that for a talented person, who is successful and holds a high position in his field, especially for foreign experts , the ceiling salary of VND120 -150 million per month is not high. However, that’s not all. Other factors, such as the working environment and the management mechanism, are also important for young researchers, including experienced ones, to want to devote themselves to the country. In addition, there should be a system for evaluating work capacity and efficiency to motivate not only experts but also employees in general.

Assoc. Teacher. Dr. Vu Hai Quan, member of the Party Central Committee and director of Vietnam National University HCMC, also said that the results of mechanisms and policies to attract talent to HCMC have not lived up to expectations. expectations, particularly in the areas of health, education and health. science and technology. For the past three years, HCMC has not been able to recruit experts. Recently, there has been a situation where some good health professionals have moved into the private sector. He also cited Singapore’s experience and its effective way of attracting talent. Specifically, Singapore attracts and offers scholarships to excellent Vietnamese students to study in Singapore, and when they graduate, they are obligated to work for Singapore.

As an insider, Dr. Hoang The Ban added that what frustrates experts, besides the income factor, is the attraction process. For the old regulations, it only took a few months to complete the procedure, but it takes several years under the current process. It is also considered unreasonable to ask experts to come for an interview and prove their abilities. Even HCMC’s Department of Science and Technology has complained about the 7-step process, in which the advisory board has to assess applications twice. It takes at least three months, not taking into account procedures, such as signing the contract, which take a long time.

The attraction of experts has become a lesson for the miraculous development of China, Japan, South Korea and Singapore over the past decades. What can Vietnam in general and HCMC learn to achieve similar development? This is the problem that must be solved to develop as expected.

The Biotechnology Center is one of four pilot units to attract experts under Decision No. 5715/2014. At that time, the center attracted four experts to work, including American, British, Canadian and Australian experts. These experts helped the center to deploy the construction of the nanotechnology laboratory and to implement some research projects in the fields of nanotechnology and cancer research – which were then new to HCMV. When Decision No. 31/2018 superseded the previous decision, experts said the policy was no longer appropriate, so they left the center one after another.