The Musi River will become a major tourist attraction

Hyderabad: Undergoing a major transformation, the Musi River is set to become a major tourist attraction in the coming years, with the state government undertaking beautification works and a series of development works along the river which runs through the city.

To implement the task, a comprehensive master plan should be prepared with the help of a consulting firm. According to officials from the municipal administration and urban development department, the plan will include the development of roads on each side and the development of the riverbanks as well.

“The waterfront development will be occupied over a length of 55 km, i.e. 8 km from Himayat Sagar to Bapughat and 47 km from Gandipet to the eastern side of the outer ring road. A 55 km long drone survey has already been carried out,” an official said.

This infrastructure development that is planned along Musi is in addition to the 14 bridges and a link road that are to be constructed. Among the total 14 bridges, the construction of two bridges, one at Musarambagh and the other at Chaderghat, will start soon.

“According to the comprehensive traffic study, passenger trips across the Musi River are expected to increase from the existing 36 lakh trips to 60 lakh trips by 2031,” an MA&UD department official said. 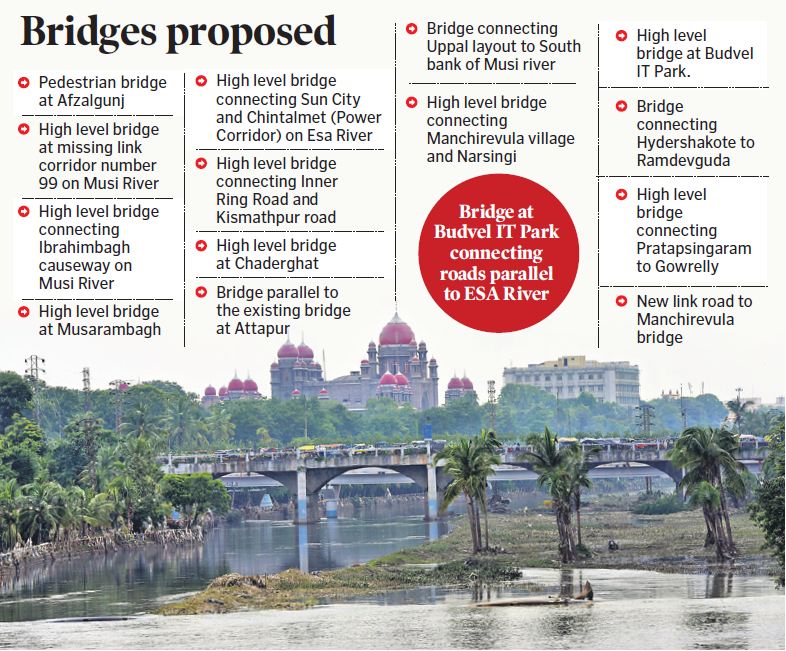 Adding this, with an idea of ​​providing efficient connectivity from the southern parts to its northern, the bridges were proposed.

The list of development works does not stop there and to keep the water in Musi clean, the state government is building sewage treatment plants at strategic locations. In addition to these major infrastructure and environmental preservation works to be undertaken along the stretch of the Musi River, beautification works have already been initiated and many other works are in progress.

Soaked in apathy for a long time, it was only after the formation of the state of Telangana that tons of debris and rubbish accumulated over the past decades were removed from the body of water that once made the Hyderabad pride.

To give Musi a facelift, walking tracks were laid out and open gymnasiums were installed in addition to the placement of benches and the arrangement of lush vegetation.

Musi’s metamorphosis is evident in Nagole with what was once an eyesore of neglect, is now abuzz with dozens of visitors.